Puerto Deseado, where Darwin once walked. At 47S, the air is thin and cool, even in full sun. The town is at sea level – the sea is just outside my hotel window – but the air feels like the mountains. Sunlight passes through without warming.

The town itself is stark and utilitarian, but the people are welcoming and the natural setting is spectacular. Other than a weeklong visit by the Beagle, the last big things to happen here were the sinking of the Royal Naval sloop Swift in 1770 and its discovery by a high-school diver in 1982. The landscape is swept flat by the wind. The port is a working port – no chowder in sourdough buns sold here.

The ria is an ancient riverbed that has been flooded by the sea. If it were formed by a glacier, it would be a fjord, but the end result is the same. A wide variety of fauna live in and around the ria, including the rockhopper penguin. Picture a penguin crossed with Elvis during his pompadour phase with highlights.

The animals are freakishly comfortable with humans nearby. We drank mate [haven’t figured out
the accent mark with this keyboard] for an hour not five feet from a penguin who watched us when he could be bothered to do so. The oystercatchers were more aloof. The cormorants fed their chicks and added yet more guano to the cliff. The Chilean dolphin stopped to play but only for a time. The giant petrel was well-named. 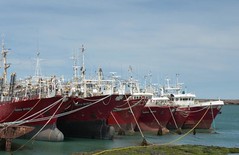 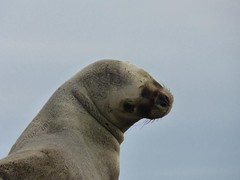 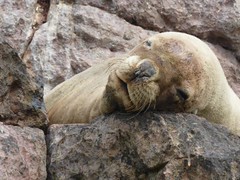 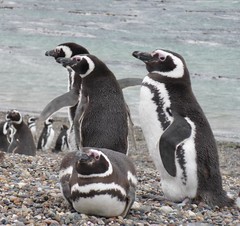